A Breath of Fresh Air

Life has changed for Dr. Maria Fedele. Every morning, as she prepares her first espresso, she likes to open the kitchen window and to take a look around—and as the early sunshine fills the streets of Taranto and the first commuters get on their way to work, Fedele takes a moment to watch the clouds on the otherwise clear sky. In the past, the air in this part of Italy, the region of Puglia, was not always great. But today, things are dramatically better, and air quality has been transformed—in part thanks to environmental efforts in which Fedele played an important role.

Maria Fedele belongs to a small yet highly dedicated team of Primetals Technologies employees whose office is located directly on Acciaierie d’Italia’s Taranto site. The team has been supporting the steel producer for several decades; since 1999, the two companies have realized a number of major projects together: a cold-briquetting plant, new basic oxygen furnaces, four slab caster revamps, two capacity upgrades for the sinter plants that included optimization of the cooler, and two new secondary dedusting systems. The latter is not the only environmental effort Acciaierie d’Italia has undertaken with Primetals Technologies thus far. Rather, the producer has recently doubled down on its ambition of making Italy’s south a pristine place to live and work.

The power of meros

Air quality was top of mind for Acciaierie d’Italia when Dr. Alessandro Labile, the company’s Head of Environment, Health, and Safety, approached Primetals Technologies regarding the proven MEROS off-gas cleaning solution. Acciaierie d’Italia was seeking a way to further tackle its dust and dioxin emissions at that time. After consulting with Primetals Technologies, the decision was made to invest in no fewer than seven MEROS plants, four of which would be installed at the producer’s sinter plants, with the remaining three filtering the off-gas coming from power plant No. 2.

“Installing seven MEROS units represents the most important phase of our multi-year environmental plan,” says Labile. The emissions generated by the site’s sinter plants had been troubling him for a long time. The big blue stack right next to the sinter plants, whose job it was to “handle” their emissions, had become somewhat infamous in the region. But Labile would not rest until the matter was addressed and resolved.

Labile’s goal was to ensure that two of the seven MEROS plants would commence operation by the end of 2021. The team of Primetals Technologies worked tirelessly to meet this target. Employees from both companies spent day and night on site for several months—even throughout the holiday season. Together, they succeeded in installing two fully operational units in record time. And as 2022 began, the blue stack had stopped emitting any visible smoke from sinter plant “E.” This change was not just a cosmetic one. The two MEROS plants had started to do their job, and they did it extremely well.

Within the steel industry, MEROS is known as a “best available technology” for off-gas cleaning. This means that there simply is no better solution available at this time, no other gas-cleaning technology that could replace it—in terms of effectiveness, efficiency, and reliability, MEROS is without equal. It was developed in 2004 by Primetals Technologies’ own Dr. Alexander Fleischanderl, with the first unit going into operation in 2007 at the plant of voestalpine in Linz, Austria. Since then, a total of 15 MEROS units have been ordered.

What is it that MEROS does so well? Designed as a modular system, it removes almost all harmful substances found in the off-gas of sinter plants and other steel-­production units. This includes elements such as sulfur oxides, nitrogen oxides, dust with particle sizes as tiny as 2.5 nanometers, dioxins, furans, polyaromatic hydrocarbons, heavy metals like lead or mercury, acidic gases, and various other harmful organic compounds.

Designed as a modular system, MEROS removes almost all harmful substances found in the off-gas of sinter plants and other production units.

MEROS traps all of these elements—more than 99 percent of them—using a sophisticated additive injection and filtering system. The filters themselves are a special high-­performance variety with a lifetime of up to ten years. Their durability is in part a consequence of the low pressure and frequency of the cleaning pulse applied by the system. Inside the MEROS plant, all off-gas is extensively recirculated, which contributes to the system’s overall effectiveness. Because of the recirculation, the filters have to turn a particle concentration of around 10,000 milligrams per cubic meter into less than 5 milligrams—no small feat, but this is how MEROS obtained the label of being a “best available technology.”

The desulfurization process relies on an additive, which is introduced into the off-gas at exactly the right dosage. This is all done automatically by the MEROS system once the correct parameters have been set. Producers can choose between using sodium bicarbonate or hydrated lime, depending on off-gas composition and on which of the two additives they can source more easily. Further options exist for the removal of organic compounds: here, producers have a choice between activated carbon or lignite. This flexibility ensures that MEROS can be operated in different regions and under varying market conditions in terms of raw materials.

For Acciaierie d’Italia, the relationship with MEROS has only just begun. The first two MEROS plants are already exceeding expectations: Dust emissions were reduced to less than 3 milligrams per cubic meter, far below the legal limit of 10 milligrams; dioxins are now at less than 0.01 nanograms per cubic meter, which is dramatically better than the 0.15 nanograms required by the Italian government. This means that sinter plant “E” and its emissions are fully taken care of. In the first half of 2023, sinter plant “D” will receive its own MEROS twins, in addition to three more units that will clean the off-gas from power plant No. 2 and feature specialized selective catalytic reduction technology from Primetals Technologies and partner company Yara to ensure optimal denitrification and waste-heat recovery. Operating seven MEROS plants simultaneously will not only have direct benefits for Acciaierie d’Italia but also indirect ones, as this setup will make operation and maintenance of their gas-cleaning equipment more simple and straightforward. Spare-part management will also be effectively streamlined. 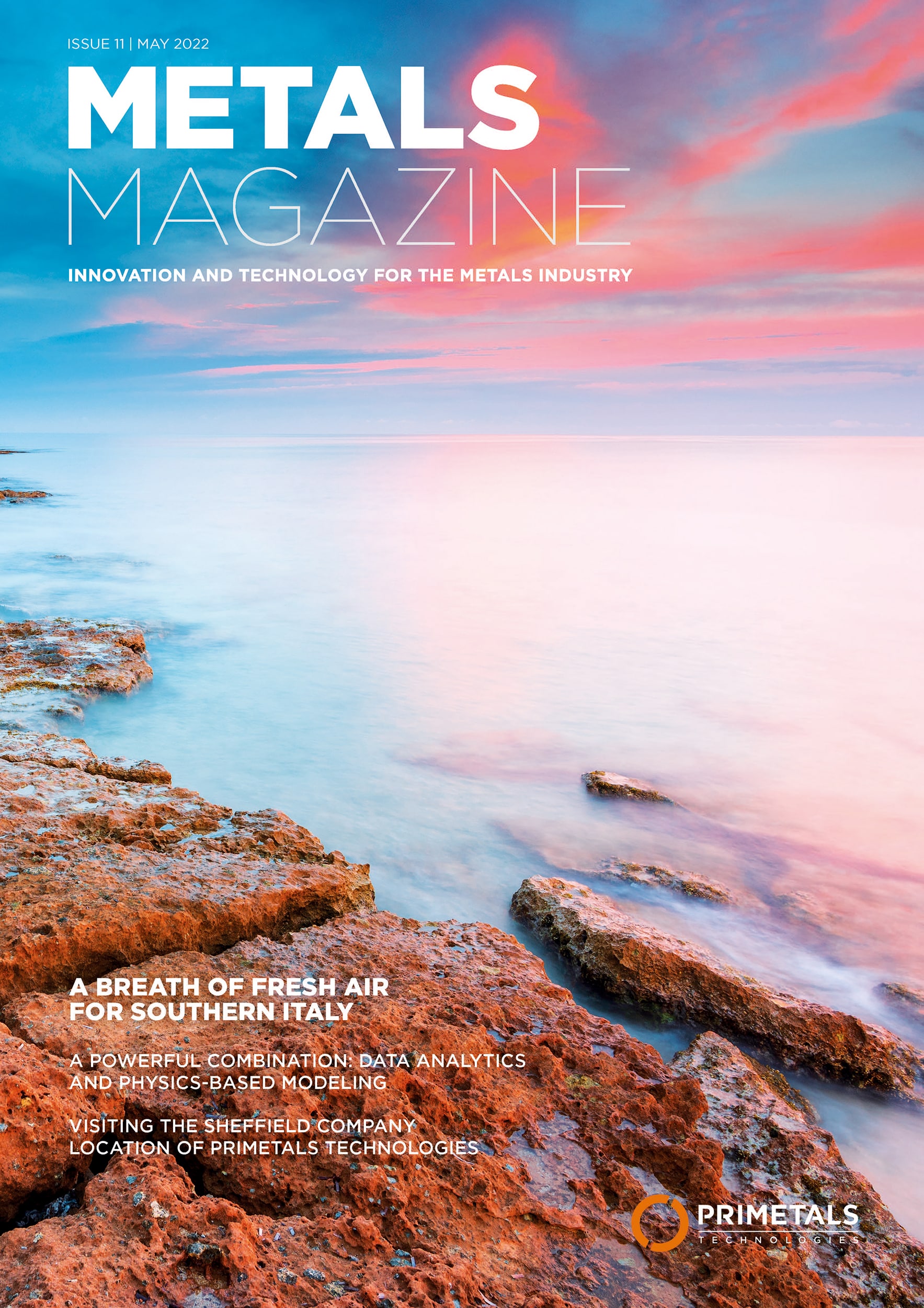 Acciaierie d’Italia will continue on its path toward even more environmentally friendly steel production. The company has already demonstrated the extent of its commitment—not only by procuring seven MEROS plants and other environmental technologies from Primetals Technologies, but also through other initiatives. For instance, Acciaierie d’Italia built the first-ever fully housed raw-material stockyards in Europe. These are gigantic constructions (see Figure 5) that ensure that neither iron ore nor coal particles will be swept away by the wind. So far, two of the housings have been completed; the third is currently being finalized.

For Maria Fedele and the Primetals Technologies team in Taranto, the future will be a busy one. They will continue to support Acciaierie d’Italia in every way they can, sharing not only Acciaierie d’Italia’s vision of even greener steel production but also its dedication to making the city of Taranto a poster child for environmental awareness. Together, the two companies will continue to do great things—for nature, for the region of Puglia, and for the air they all breathe in Taranto.

THE HISTORY and Future OF MEROS

With a great track record of “cleaning” up heavy industry, Maximized Emission Reduction of Sintering (MEROS) has made its mark on the twenty-first century and shows no signs of slowing down. MEROS demonstrates Primetals Technologies’ commitment to innovation, the environment, and sustainability.

Maximized Emission Reduction of Sintering, or MEROS, debuted in 2007. The brainchild of Dr. Alexander Fleischanderl, Head of Green Steel at Primetals Technologies, MEROS began as part of a new vision for the steel industry. Often considered a “dirty sector,” the steel industry was met with the motivations of Dr. Fleischanderl and other specialists looking to lessen steel producers’ contribution to air pollution while increasing energy efficiency and sustainability.

As one of the “dirtiest” parts of steel production, the sintering process accounts for a significant percentage of iron and steelmaking emissions. The high volumes of off-gas emitted usually contain large amounts of dust, sulfur dioxide (SO2), nitrous oxides (NOx), and toxic pollutants such as heavy metals—e.g., mercury (Hg), lead (Pb), cadmium (Cd)—and organic compounds. Flue gas treatment can employ wet and dry processes to remove these pollutants. While the wet process was traditionally implemented, several drawbacks, including operational costs and overall effectiveness, drove Fleischanderl and the team at Primetals Technologies into the direction of a dry dedusting system.

During early development, Primetals Technologies, then Siemens VAI, partnered with voestalpine in Linz, Austria, to produce the first-ever MEROS plant. What was once perhaps considered a far-fetched idea, the group of individuals who first saw MEROS at voestalpine in 2007 stood in awe of something they could not see. The pollutants that once made the sinter plant off-gas visible to the naked eye had been successfully removed.

From day one, MEROS exceeded design expectations regarding performance and is still the most modern and powerful system for cleaning off-gas from sinter plants. The core technology of MEROS has also led to further innovations such as MERIM, a dedicated dry gas-cleaning solution for ironmaking, and MERCON for BOFs. With a passion for the environment, experts at Primetals Technologies have also developed By-Product Leaching to treat the residual dust from dry dedusting systems, particularly MEROS. When used in combination, these innovations contribute to the circular economy by cleaning the off-gas from sinter plants and by recycling by-products from the residual dust for reuse in the sintering process (for more on By-Product Leaching, see pages 60–65).

Over the past fifteen years, MEROS expanded as one of the most widely adopted solutions for off-gas treatment worldwide. With its modular flexibility and innovative dry dedusting technology, MEROS continues to be one of the most inspiring technologies for sustainability and environmental solutions at Primetals Technologies. As such, the story of MEROS is far from over, with new chapters being written year after year.

On A Mission For Taranto